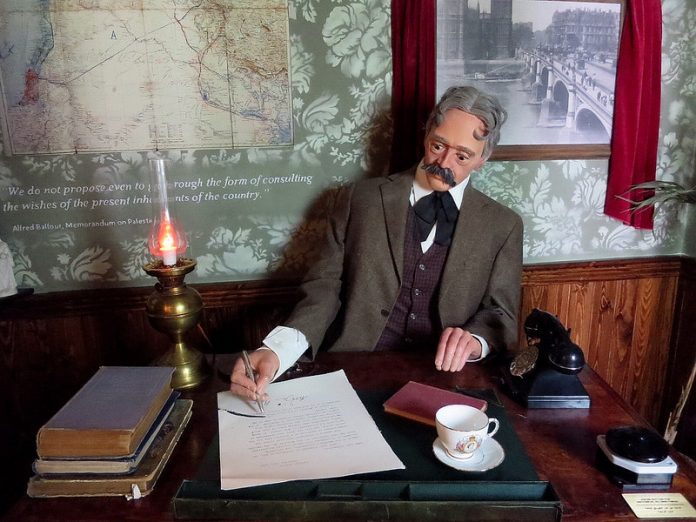 Much has already been written about the Trump Administration’s release of its long-awaited plan for Israeli-Palestinian peace. I will not repeat the criticisms. Instead, I will focus on what I found to be the striking and disturbing parallels between this Trump “Deal of the Century” and last century’s infamous “Balfour Declaration.”

Though certainly longer and more pretentious than the “Declaration”, in many ways, the “Deal” reflects much the same intent and logic as its predecessor. There are also, of course, some significant differences.

One initial difference, of course, is that while Lord Balfour’s statement was just one rather complicated sentence of 67 words, President Trump’s “Peace to Prosperity: A vision to Improve the Lives of the Palestinian and Israeli People” is over one hundred pages, including appendices of details, maps and charts. But here’s what they have in common. Both are examples of the extraordinary arrogance of imperial powers. Both are inherently racist, viewing one group of people as superior, with their rights as more important than those of another less favored group. And both were motivated by callous political considerations.

In the 20th century, the founders of the political Zionist movement realized they could not achieve their ambition of founding a national home for the Jewish people unless they had an imperial sponsor to support them. In succession, they courted the Ottoman Sultan, the German Kaiser, and even the Russian Czar. When it became clear that Great Britain would be a willing accomplice, they focused energy on winning its support.

The British needed little convincing since they understood the potential role Jewish colonization could play in securing their Middle East ambitions. And the British government was hopeful that by issuing the Declaration, they might win the support of influential Jewish leaders in the US to support the Allied powers against the Central Powers in World War I.

In issuing his Declaration, Balfour pledged to support the creation of a Jewish “national home” that would help to secure their interests in the eastern Mediterranean region. In doing so, Balfour gave no consideration to the fact that the land he was promising wasn’t his to give. Great Britain was, after all, imperial power and could whatever it wanted to do. He also demonstrated little or no regard for the rights of the inhabitants of that land. The Declaration did include a phrase saying “that nothing should be done which may prejudice the rights of the existing non-Jewish communities in Palestine,” but that was never intended to be taken seriously. When chided by then US President Wilson, that the aspirations and rights of the inhabitants of Palestine should be considered, Balfour made his intentions clear, saying that “In Palestine, we do not propose even to go through the form of consulting the inhabitants of their wishes…Zionism…is of far greater importance…than the desires and prejudices of the 700,000 Arabs who inhabit that land.”

Imperial arrogance, racism and disregard for the rights of the Palestinians, and callous domestic politics – these were the elements that motivated Balfour. They are the same elements that can be seen to be behind Trump’s “Deal of the Century.” There is, however, in the Trump “Deal” an additional element that makes it even more disturbing than its predecessor – and that is its blatant disingenuousness.

In awarding to Israel huge swaths of the West Bank, including all of “East Jerusalem,” like Balfour, Trump “gives” away from land that isn’t his to give – but then, the US, under Trump, sees itself as a law unto its own and can do whatever it pleases. In subordinating Palestinians rights to Israeli security concerns and placing onerous burdens on Palestinians, while placing none on the Israelis, Trump, like Balfour, is demonstrating that, in his mind, Israeli needs and their very humanity are of greater importance to him than those of the “Arabs who inhabit that ancient land.” And in timing the release of his plan to deflect from his trial in the US Senate and inviting to its launch his most ardent Jewish and right-wing Christian Evangelical supporters, Trump was making clear that domestic politics were of utmost importance in his calculations.

What makes this “Deal” more disturbing than the “Declaration” is that it ignores the history and consequential developments of the last century – two devastating World Wars, the emergence of a body of international law and conventions that sought to learn the lessons of those wars and regulate the behavior of nations in times of war, and multiple Arab-Israeli wars that have taken the lives of tens of thousands, left millions as refugees, and created a deep well of bitterness among those who were expelled and those denied their legitimate rights under a cruel occupation. The Trump “Deal” pretends that it can brush all of this history aside, tear up this body of laws and conventions, and disregard the humanity of the victims of dispossession and loss of rights.

Most disturbing is that, like a real estate huckster, the “Deal” attempts to do all this with a trickster’s “sleight of hand,” saying  “it’s a great deal for the Palestinians, “theirs for the taking,” “a win-win,” “it’s their last chance,” and then cynically adding “if they don’t screw it up.” In this regard, the Trump “Deal” makes clear where it is ultimately different than Balfour’s Declaration. At least Balfour was honest about his disregard for the rights of the Palestinians.

I’d like to be high-minded and state that this “Deal” will never succeed. But I’ve learned my own hard lessons from history. An uncontested imperial power can flaunt international law and wreak havoc, leaving vulnerable people to pay the price for its arrogance and callousness. As it is, the embrace of Trump’s plan by the Israel right – and that includes both Netanyahu and his opposition – will embolden them to move aggressively to take advantage of this license they have been given to consolidating their hold over the Occupied Territories. The divided and visionless Palestinian leadership is in no position to mount an effective challenge either to Trump or Israel. And the equally divided Arab World and the ineffectual EU will complain but take no meaningful action as Israel moves to consolidate its hold on the Territories. What we have, finally, is a one-state reality – an Apartheid state – and with that, we enter a new period of struggle for equality and human rights.

Welcome to the world ushered in by the “Deal of the Century.” It is a world not unlike the one that confronted Arabs in Balfour’s World War I era -– the injustices it will bring forth and the struggle for justice it will give birth to will continue.