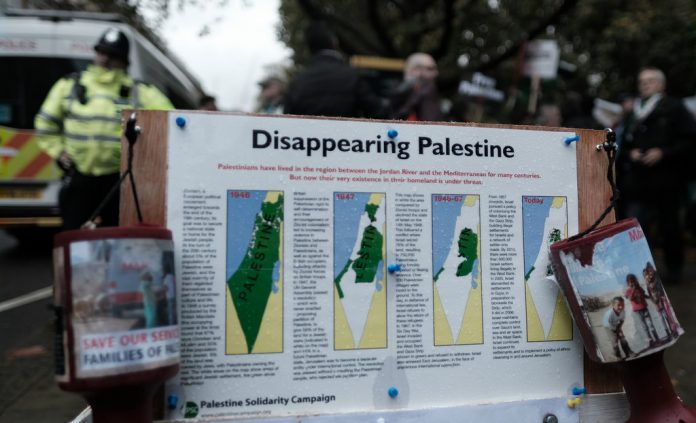 Last week, after reading my column, “The Struggle to Advocate for Palestinians Has Never Been Easy,” a reader did a bit of research, found, and then sent me an article I had written 30 years ago.

Because this three decades old piece tells an important story, I have included it below, followed by a bit of background.

When Ruth Ann Skaff, an Arab-American community activist and Democrat from Houston, was appointed to the Democratic National Committee after the convention in Atlanta, Arab Americans were overjoyed. Skaff’s appointment signaled–at last–the Democratic Party’s willingness to welcome us as an ethnic constituency. But this taste of inclusion is rapidly turning bitter for those who dare to hold opinions not shared by some others in the party.

For years Arab Americans have worked, to no avail, to meet with the national party leadership and be recognized as a constituent group. Our community still remembers the hurt when the Mondale campaign returned contributions made by Arab-American Democrats in 1984.

This year, working hard for Jesse Jackson, we won a record number of delegate and standing-committee slots to the Democratic convention. As a result of these efforts, and with Jackson’s strong support, Skaff was appointed to the national committee. Then the storm broke. No sooner was her appointment announced than a Texas DNC leader expressed concern and regret over Skaff’s inclusion in the 400-member committee. More recently, five Republican members of Congress challenged presidential candidate Michael S. Dukakis to dismiss Skaff and two black DNC appointees–Los Angeles City Councilman Robert Farrell and the Rev. Willie Barrow, executive director of Operation PUSH in Chicago–for their “anti-Israel, pro-Palestinian” views.

The Democratic leadership should have immediately exposed this Republican attack for what it was–a desperate and dangerous attempt to shift to the Democrats the specter of anti-Semitism that had arisen in their own campaign when it was discovered that some former supporters of the Nazis held positions on a Bush election committee.

Instead, the Democratic Party took the bait. Some Democratic members of Congress went so far as to join in the call for the dismissal of Skaff, Farrell and Barrow, while all that party chairman Paul G. Kirk could offer was a reaffirmation of his party’s “solid support for the state of Israel and its unwavering intolerance of bigotry and anti-Semitism.”

We are told that Skaff is disliked because of her views on the Middle East. Skaff has been critical of Israel’s invasion into Lebanon and Israel’s policies in the West Bank and Gaza. She supports the Palestinians’ right to self-determination, including their right to choose their own leadership. She has also publicly stated that she supports security for the state of Israel. These views, according to a Gallup poll of March, 1988, are shared by a plurality of American citizens. Again, why the controversy?

Is it because Skaff, whose grandparents were from Lebanon, is an Arab American? Some leaders in the Jewish community have told us no. And yet we feel that this must be the case. Skaff is deeply committed to a broad range of concerns, including immigrant rights, an end to ethnic stereotyping, Middle East peace and reform in Lebanon–and security and justice for Palestinians. Her commitment to these issues is related to her ethnicity. Yet there are many other Americans who share these same concerns. Would her concerns be an issue if not for her ethnic origin? I think not.

No one should be required to pass a litmus test on areas of U.S. foreign policy in order to participate in domestic politics. In particular, it strikes me as somewhat credulous to expect that Skaff would express support for Israeli policies at a time when those policies have resulted in such hardship and suffering for the people of her ancestry in the Middle East. Such a test would be, by definition, exclusionary to any Arab American.

That such a litmus test links support for Palestinian rights with anti-Semitism is also patently unfair; nowhere in Skaff’s personal life is there any shred of evidence of her holding such views.

Even suggesting such a loyalty test not only silences national debate on the Middle East, which is what its advocates clearly intend. It also denies to Arab Americans the opportunity to gain access to the political process where their other concerns can also be addressed.

The real litmus test should be the ability of both parties to include representatives of the Arab-American community and to allow free and open debate on issues of concern to all Americans.

Arab Americans have come of age. We refuse to accept the limiting definition of ourselves as merely the “other side” of the Arab-Israeli conflict. We are not a faction but a constituency, and we demand inclusion–in this instance, our rightful place in the Democratic Party.

The Democratic Party should welcome into its ranks Ruth Ann Skaff and the constituency that she represents, and it should defend, even encourage, her right to debate all issues of concern to that constituency. The fundamental principles of our democracy guarantee these rights to all citizens.

It seems so logical. Right? So, why is the storm still brewing?

The reason for the storm was that at the 1988 Democratic Convention, led by Jesse Jackson’s presidential campaign, we had introduced and then debated from the podium of the convention an amendment to the party’s platform calling for “mutual recognition, territorial compromise, and self-determination for both Israelis and Palestinians”. It should not have been controversial, but it was.

I had been warned by party leaders. They said, “If you even mention the ‘P-word’ (meaning, Palestine) in the convention, you will destroy the Democratic Party.” We not only had a vigorous public debate, we also had a floor demonstration of over 1,000 delegates calling for “justice for Palestinians.”

The reaction was near hysteria and Skaff, Farrell, and Barrow, who had all been Jesse Jackson delegates, bore the brunt of this hysteria. Republicans sought to use the Palestine debate against the Democratic Party. And, instead of defending us and the importance of open debate, the Democratic Party leadership cowered. The party’s 1988 nominee, Michael Dukakis, went so far as to reject our community’s endorsement.

This episode marked the end of Arab American exclusion from the national party. At the end of 1988, when Ron Brown, Jesse Jackson’s campaign manager, became the Chair of the Democratic Party, he publicly welcomed the community into the party, speaking at our events (ignoring pressure to shun us), and including Arab Americans in party affairs. When Bill Clinton became President in January of 1993, even more doors were opened.

As I have noted, even with these opportunities, we face renewed challenges to fully engage and raise our voices demanding justice for Palestinians – with efforts underway to criminalize legitimate criticism of Israel and support for Palestinian human rights. What we have learned from past experience is that with a strategy grounded in hard work, persistence, reasoned discourse, and the support of allies, we can face down our adversaries and prevail.