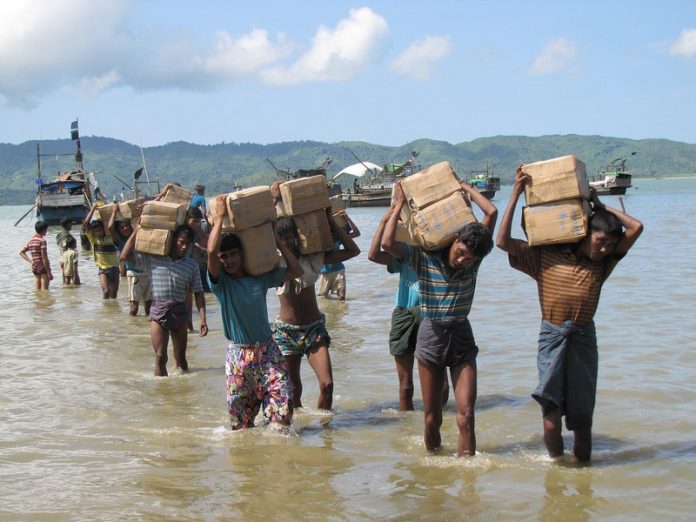 “With regard to the alleged human rights violations in Rakhine State, it is indispensable that the Myanmar government and military take appropriate measures promptly,” Abe was quoted by the Japanese Foreign Ministry as telling Suu Kyi in their meeting.

There is nothing ‘alleged’ anymore about Myanmar’s genocidal crimes and intent against the Rohingya people. But mindful of Myanmar’s ugly face-saving position trying to evade any responsibility for its horrendous crimes and its willful abhorrence for the ‘R’ (Rohingya) term, Abe was understandably diplomatic in his choice of words when hosting Suu Kyi. But how long can his government continue to please an evil, murderous, genocidal, criminal regime that feels neither remorse for its scorched-earth genocidal campaign nor is willing to change its course?

Since 2017, nearly a million Rohingya refugees have fled to Bangladesh in search of safety. Despite being the children of the first settlers to Arakan (renamed Rakhine state) the Rohingyas are considered stateless people in Buddhist Myanmar where for more than half a century they have faced genocidal pogroms, unfathomed discrimination, and unparalleled persecution. Each and every one of the rights enshrined in the Universal Declaration of Human Rights (UDHR) is denied to them. Before the current crisis unfolded, they were already recognized as the most persecuted people of our time.

The Independent International Fact-Finding Mission on Myanmar in their September 2019 report directly placed responsibility for the genocide on the state of Myanmar, and said that not only does Myanmar continue to commit these crimes, but it still has “genocidal intent” towards the Rohingya.

While tens of thousands of Rohingyas were killed in Suu Kyi’s Myanmar and perhaps even a larger number raped in one of the most calculated genocidal pogroms of our time in the full view of the world community, forcing exodus of so many survivors to seek refuge in Bangladesh – their repatriation to their ancestral land in Arakan remains a challenge. The world community has done virtually nothing to ensure their safe return in the UN-monitored safe zone with their citizenship rights and dignity intact as free citizens of Myanmar.

The regional politics have brought the situation to a standstill, because China and Japan have become some of the strongest protectors of Myanmar, defending the government from both economic and diplomatic retaliation. Nor is the role of Modi’s government in India helpful either. Of course, one can understand such rogue attitudes from two of the global upstarts that have proven to be guilty of creating their own version of the Rohingya crisis with the minority Uighur and Kashmiri (and who knows, in the coming days, add to that list – the Assamese) Muslims who today face extinction – political, social, economical and cultural.

Since its birth, Burma (later named Myanmar) has been a highly racist and fascist state. Its government had changed but its basic incoherence to evolve into a modern state – that is respectful of its diverse religious, ethnic and racial groups – has remained the same. Suu Kyi inherited a criminal regime and now leads another criminal regime! She remains a remorseless mass murderer and has mastered the art of political doublespeak.

During her meeting with Abe, Suu Kyi expressed her intention to address the ‘Rakhine’ issue “correctly” and take the necessary steps. Abe pledged Japan’s support. It is worth noting that despite Myanmar’s genocidal crimes, the Japanese government remains one of its major donors. Last year, Abe promised an aid package of 7.73 billion USD to Suu Kyi as Japan competed for regional influence with China, which remains Myanmar’s biggest trading partner. It is worth recalling that Japan maintained economic support for the country throughout the Western sanctions of 2003, fostering a good relationship with the criminal government.

How long can Japan evade its own culpability for birthing the Rohingya crisis? Its blood-stained connection is rather very deep and old.

After all, imperial Japan had played a dreadful role during the second world war (1939-45) after occupying British-Burma. Its occupation  (1942-45) led to the ethnic cleansing of hundreds of thousands of Muslims all across Burma, let alone the Indian community that hitherto formed the backbone of the economy and government – providing the majority of the employees in the service of the British colonial administration in Rangoon (today’s Yangon). Nearly half a million survivors fled to the British-ruled Bengal and Bihar in India in a harrowing journey (called the ‘Road to Death’) of nearly 300 miles on foot through jungle, mountain and swamp with perhaps tens of thousands dying on their retreat from Burma. It is said that 70 to 80 percent of those who reached British-ruled India were afflicted with diseases such as dysentery, smallpox, malaria or cholera, with 30% “desperately so”.

Panglong, a Chinese Muslim town in British Burma, was entirely destroyed by the Japanese invaders in their invasion of Burma. [The Hui Muslim Ma Guanggui became the leader of the Hui Panglong self-defense guard created by Su, who was sent by the Kuomintang government of the Republic of China.] The Japanese burned Panglong, driving out the over 200 Hui households out as refugees who settled in Yunnan and Kokang.

The Rohingyas of the Arakan in Burma were particularly affected when the Rakhine Buddhists and Burmese fascists of the Burma Independence Army, aided by the Japanese occupation forces, conducted horrendous crimes of obliterating their existence in the southern part of the Arakan state. They faced extinction, rape and pillage as a result of Buddhist-fascist-Japanese-instigated riots in Akyab (today’s Sittwe) and many other towns in Arakan. The surviving Rohingyas fled to the north in what would later be known as the Mayu Frontier region. They fought on the side of the British forces against the fascist Japanese occupation forces and their Burmese and Rakhine Buddhist allies.

Sadly, the British colonial government [as it has done in many of its former colonies] betrayed the Rohingya people soon after Japan had lost the great war. In spite of their cultural and religious ties with Bengal, the Rohingya majority territory in the northern Arakan state was made part of the newly independent Union of Burma. And the rest is history!

As is quite evident now, Myanmar has no desire to take the Rohingya refugees back. Worse still, the remaining 600,000 Rohingyas that are inside Myanmar are at serious risk of genocide; they face daily persecution and are more vulnerable today as a religious and ethnic minority than any time before. It is both unsafe and impossible for the refugees in Bangladesh to return to their homes in Myanmar. And while there have been sanctions from the United States against some Burmese generals and troops, no major changes have occurred.

As hinted above, much of the problems that divide the major communities in the Arakan – Rakhine and Rohingya – go back to those tragic years of the Japanese occupation of Burma.

Some 70 years on, it is sad to see that Japan continues to provide financial incentives and aids to the Burmese governments, in spite of the latter’s incessant crimes against the ethnic Rohingya and other minorities. It is simply inexcusable!

So, while one may appreciate Prime Minister Abe’s call to redress the Rohingya issue, it does not absolve his government of providing a lifeline to the murderous regime that is guilty of genocide. One cannot but also question the wisdom of Abe’s government that continues to fatten a savage beast that has proven to be genocidal. What Suu Kyi’s government needs is a big stick and not an economic aid that only energizes its murderous instinct and boosts its savagery. Its leadership needs to be brought to the Hague for its genocidal crimes against the Rohingya people.

It is really sad to observe the criminal silence of our generation with the Rohingya genocide some 70 years after the UDHR was adopted in the United Nations General Assembly. The extermination of an entire ethnic group continues silently, and debates and negotiations progress while villages and towns burn. Economic interests should not shield horrific crimes, and the Rohingya are suffering for the world’s inaction.

Shame on Japan, China and India for shielding Myanmar’s murderous regime! And, shame on us all for our inexcusable silence and failure to stop genocidal crimes!