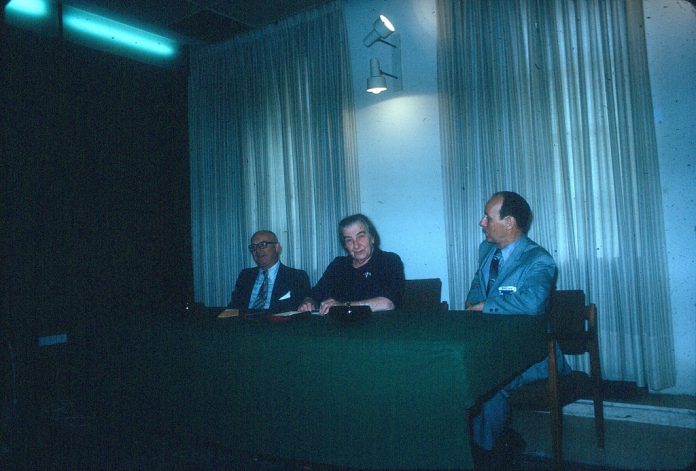 Ben-Gurion said about her: “The only thing Golda knows how to do is to hate!”

Golda Meir did not hate me. That would be an understatement. She detested me.

Once, in the middle of a speech in the Knesset (I believe it was about allowing the Beatles to appear in Israel) I interrupted myself and said: “Now I want to answer MK Golda Meir…”

“But MK Meir has not said anything!” the chairman objected.

“I am not answering an interjection,” I explained. “I am answering her grimaces!”

And indeed, Golda was grimacing, every muscle of her face proclaiming her detestation.

THE THIRD chapter of Raviv Drucker’s interesting series about Israel’s first Prime Ministers was devoted to her.

Levi Eshkol died in February 1969 of a sudden heart attack. Jokers insisted that it was the result of the 74 year old leader marrying a woman 40 years his junior.

There were plenty of popular candidates to succeed him, but – what a pity! – none was a member of the ruling Labor Party (Mapai). So, out of nowhere, Golda Meir was chosen. She was not even a minister at the time.

Then a miracle occurred. On the eve of her coming to power her popularity rate in the polls was near zero. Overnight, it rose to over 80%.

During the following years, her authority was unlimited. There was no explanation for it. She had no personal power base, no personal political organization. She dominated the state with the sheer power of her personality.

I vividly recall one scene. In 1973, a new president of the state had to be elected. Golda was intent on having her candidate, a worthy university professor called Ephraim Katzir, elected. The opposing candidate was a worthy person, too.

At the same time, the Knesset was about to enact a new law concerning the method election results were translated into the actual size of the factions. Called by us “the Bader-Ofer conspiracy”, it was designed to benefit the largest factions and hurt the smallest, one of which was mine.

I succeeded in forming a coalition of all the small parties – left, right, religious and secular – and together we had the power to decide who would be president. So we presented an ultimatum to the Minister of the Treasury, Pinhas Sapir, who was the strongman of the Labor Party. Annul the proposed law and we shall vote for Katzir, otherwise we shall vote for the opposing candidate.

Sapir took out his legendary little notebook, added up the numbers and decided that we did indeed have the power. “Wait here,” he told us. “I am going to Golda.”

What followed was astounding. We saw him enter Golda’s room. After 10 minutes he came out, a changed man. The almighty Sapir, nicknamed “the director of the state”, came out like a dwarf, avoided our eyes and went straight to the telephone. He called an ultra-orthodox religious faction, promised them a bank and got their votes. Golda had told him: “I will not let Uri Avnery decide who will be the President of Israel!”

BUT THESE are small episodes, compared to the biggest event in her life and the life of the nation: the Yom Kippur war.

In the 1967 Six-Day War, under Eshkol, Israel had conquered immense territories, especially the Sinai peninsula. Our army was dug in along the Suez Canal.

A new Egyptian president, Anwar al-Sadat, was intent on getting the Sinai back. He put out discreet feelers with an incredible offer: if the Israelis go back to their former borders, Egypt would make peace with Israel. When this was brought to Golda, she rejected the idea with contempt.

As usual, Drucker brings out all the facts, many of them unknown until now. But again, I am not sure that he got the picture of Golda quite right.

Golda was born in Ukraine, and when she was 7 her family immigrated to the US, after witnessing – she claimed – a major pogrom. She grew up as an American Jewess, married and moved to Palestine at the age of 26. The young couple went to live in a Kibbutz, and Golda became active in the Mapai party.

While she was never a very attractive woman, she seems to have had a lot of love affairs with elderly party leaders. I remember many rumors about them at the time and understand why Drucker devotes a lot of time to them, though I myself find them singularly uninteresting.

The basic fact is that Golda had from the beginning an abysmal contempt for Arabs. Like all her predecessors (except Moshe Sharett, as I have already noted) she never had any real contact with Arabs, was totally ignorant of Arab culture and despised them from the bottom of her heart.

The ease with which the Israeli army had beaten three Arab armies in 1967 amplified this contempt. Golda did not dream of giving back the Sinai peninsula to Egypt, which was a contemptible Arab state. Especially since it was now headed by Sadat, who was regarded even by his great predecessor, Gamal Abd-al-Nasser, as a weakling.

Had she understood anything about the Arab world, Golda would have known that the Egyptians are an immensely proud people, who even in poverty are conscious of being the heirs of an 8000-year old culture. The canal is a part of that pride. The idea that they would ever give it up is infantile – as much as the idea that the Palestinian people would ever give up Arab Jerusalem.

THAT WAS the woman who headed Israel at one of its most crucial moments.

Just before Yom Kippur, 1973, the Israeli chief of intelligence was called to London for an urgent meeting with Israel’s most valuable spy, an Egyptian traitor, the son-in-law of Nasser. He hastened back to reveal that the Egyptian army would attack on Yom Kippur.

Golda was not impressed. The Egyptians? What could they do? She called in her generals, and a vivid discussion ensued. Should the army reserves be called up? And if so, how many? 200,000, as the army chief of staff, David Elazar, proposed, or just 50,000 as defense minister Moshe Dayan suggested. Golda, like a typical politician, compromised: 100,000 were called up.

Later, this became the crux of the matter. “Why were the reserves not called up?!” opposition leader Menachem Begin thundered again and again.

In Drucker’s film, Golda pictures herself as a helpless old woman, surrounded by the young and dynamic generals. The truth was quite different. Golda was the dominant and domineering personality at the deliberations, the generals were like children in her presence.

When the despised Egyptians crossed the canal and overran all the renowned Israeli strongpoints, Israel was dumbfounded. The idolized Moshe Dayan, incompetent as always, went around prophesying “the destruction of the third temple” (following the two temples of antiquity). Fortunately, Elazar (nicknamed Dado) proved competent and in the end Israel gained the upper hand.

Sadat came to Israel to make peace, a meeting between him and Golda was arranged. Golda, all smiles, shook his hand, describing herself as “the old lady”. The dead of the war did not rise from their graves.

Are the present leaders of Israel wiser than Golda? Do they respect the Arabs more? Are they ready to give back the occupied territories?