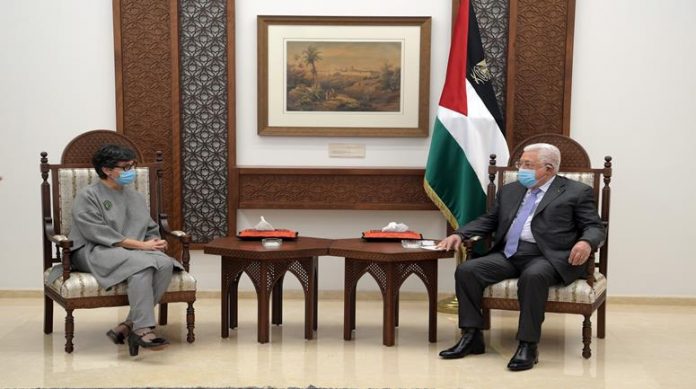 Ramallah, (UNA-OIC) – Spain today reiterated its stance in support of peace in the Middle East based on the two-state solution and international law.

Speaking during a meeting with President Mahmoud Abbas at the presidential headquarters in Ramallah, Spanish Foreign Minister Arancha González Laya reiterated her country’s stance in support of the two-state solution, stressing that her government would continue to support the Palestinian people to build their institutions in preparation for the future Palestinian state.

She also delivered a letter from Spanish Prime Minister Pedro Sánchez to President Abbas in which Sánchez stressed the outstanding bilateral Spanish-Palestinian relations and Spain’s keenness on consolidating them and continuing to support the political process based on the two-state solution principle.

He thanked Spain for its positions in line with international law and the European Union’s decisions supporting achieving peace based on the UN resolutions, as he recalled Spain’s role in convening the 1991 Madrid Conference.

African leaders commit to end AIDS among children by 2030

African leaders commit to end AIDS among children by 2030