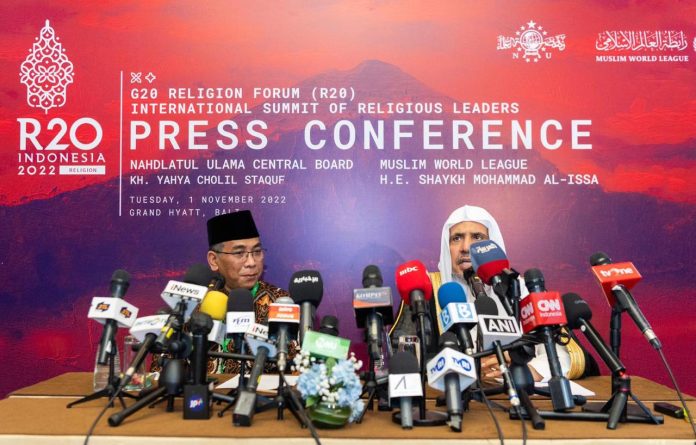 Bali (UNA-OIC) – The first edition of the G20 (R20) Interfaith Summit starts today, Wednesday, from the Indonesian island of Bali, which will be adopted for the first time within the official agenda of the G20 leaders, ahead of their annual summit that brings together the leaders of the most powerful economies in the world.

Indonesian President, Mr. Joko Widodo will inaugurate the work of the summit, which will be hosted this year by the Muslim World League (MWL), in partnership with the Indonesian Nahdatul Ulama, affiliated with it 120 million Muslims.

His Excellency the Secretary General of the Muslim World League, Chairman of the Association of Muslim Scholars, Sheikh Dr. Muhammad bin Abdulkarim Al-Issa, will deliver an opening speech in which he welcomes the attendance to this major international religious event, the first of its kind. He will express the hoped-for role of religion in solving global problems, by reading reality through a broader vision, wisdom and concern for the human being, and trying to provide more comprehensive and integrated solutions to the most important contemporary humanitarian issues. This is in addition to the speech of His Excellency the Chairman of the Board of Directors of Nahdlatul Ulama, Sheikh Yahya Khalil Thaqouf.

Two founders and chairmen of the summit, His Excellency Dr. Al-Issa, and His Excellency Sheikh Thaqouf, held a press conference, in which they discussed the agenda of the (R20) and the agenda of its exceptional religious summit in the course of the “G20”, and the goals it aspires to achieve, in the wide presence of the top international media, including news agencies, satellite channels and newspapers.

This summit is being held with the high participation of major religious leaders from the twenty countries and others, specifically the most influential leaders around the world, discussing the axes of the two-day meeting, in which seven plenary sessions are held. This is in addition to the opening session in which religious leaders take turns giving speeches and discussing the issues facing the world today, and the desired role that religions and their leaders can contribute to their solutions.

The summit will conclude with the closing statement, and the handing over of the next presidency to India, which will host the second edition of the (R20) Interfaith Summit in parallel with its hosting of the G20 Summit in 2023.

It is noteworthy that the upcoming summit will be organized by (R20), which is the interfaith communication group of the G20, whose approval was announced by the presidency of the G20 Summit for this year. It was established at the initiative and joint presidency of His Excellency the MWL’s SG, President of the Association of Muslim Scholars, Sheikh Dr. Muhammad bin Abdulkarim Al-Issa, and His Excellency Sheikh Yahya Khalil Thaqouf, Chairman of the Board of Directors of Nahdlatul Ulama. It will be the first occasion in history in which the official representatives of the most widespread religions in the world will gather under the official umbrella of the bloc of the most powerful economies in the world. This religious summit will witness the launching of “Building Bridges between East and West for Peace” Forum to transcend the “diaspora” and “hostile” from traditional dialogues for decades, to this effective and sustainable step.