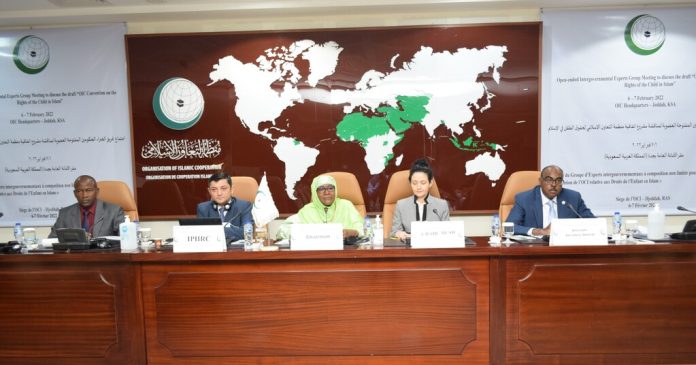 JEDDAH (UNA-OIC) – The Open-ended Intergovernmental Group of Experts meeting to discuss the draft of the Organization of Islamic Cooperation (OIC) Convention on the Rights of the Child in Islam was held at the headquarters of the OIC General Secretariat, on Sunday, 06 February 2022.

At the start of the meeting, the participants observed a minute of silence for the Moroccan boy Rayan who died after being trapped in a well. Participants also noted the strenuous efforts made by the authorities in the Kingdom of Morocco to save the child.

The OIC General Secretariat offered its sincere condolences to the Kingdom of Morocco and the family of the boy Rayan, praying Allah the Almighty to grant his family forbearance and consolation.

The OIC Secretary-General, His Excellency Mr. Hissein Brahim Taha, in his speech delivered on his behalf by Ambassador Tarig Ali Bakheet, the OIC Assistant Secretary-General for Humanitarian, Cultural and Social Affairs, said that the meeting is being held in implementation of the resolution of the Council of Foreign Ministers (CFM) adopted at its forty-seventh session, held in November 2020 in Niamey, which called on the General Secretariat to hold a meeting of a group of experts to discuss and finalize the draft OIC Convention on the Rights of the Child in Islam, which was prepared by the Independent Permanent Human Rights Commission (IPHRC) upon request of the Council of Foreign Ministers.

H.E. the Secretary-General said that the meeting aims to discuss and enrich the draft OIC Convention on the Rights of the Child in Islam with the aim of finalizing it to be subsequently submitted to the Council of Foreign Ministers for approval.

The OIC Secretary-General drew attention to the challenges facing the world today in the field of child protection and care, as a result of the deteriorating security and humanitarian conditions and indicated to the importance of intensifying cooperation between Member States and the consequent need to give children protection issues the attention they deserve.

The Secretary-General affirmed his confidence that the meeting will be crowned with success and reach outcomes that contribute to enriching and finalizing the draft convention.