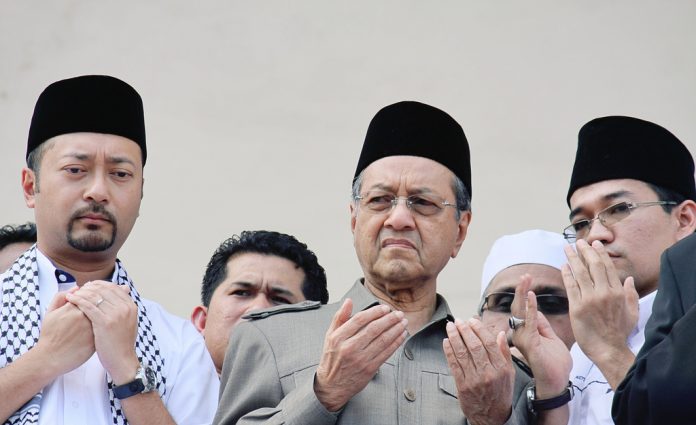 Mahathir Mohamad was always a curious character. He was prime minister of Malaysia for 22 years,
and although he did not enrich himself, many of his cronies did very well from corrupt practices that he did little
to curb.

He was a ruthless authoritarian who had his own deputy prime minister, Anwar Ibrahim, jailed on a trumped-up charge of sodomy when Anwar called for economic and political reforms in 1998. But he preserved Malaysia’s basic democratic institutions when ethnic resentments threatened to overwhelm them, and he left the country in good shape economically when he retired at the age of 75 in 2001.

He was a ruthless authoritarian who had his own deputy prime minister, Anwar Ibrahim, jailed on a trumped-up charge of sodomy when Anwar called for economic and political reforms in 1998. But he preserved Malaysia’s basic democratic institutions when ethnic resentments threatened to overwhelm them, and he left the country in good shape economically when he retired at the age of 75 in 2001.

It’s unlikely that he ever imagined he would be returning to power at the age of 92.

Like Mahathir, his successors in office came from the United Malays National Organisation, a party claiming to represent the Malay half of the population that has dominated every ruling coalition since 1957. He criticised them from time to time, but he remained a loyal member of UMNO until the flagrant corruption of the last prime minister, Najib Razak, drove him to quit the party in 2016.

Najib’s thievery was big and brazen. $4.5 billion disappeared from a state investment vehicle called 1 Malaysian Development Berhad (1MDB) on his watch, and $700 million of it ended up in his bank account. (He said that it was a gift from a friend in the Middle East.) Many other people in his government also got large sums of money, but only Najib bought a hundred-meter yacht complete with helicopter pad and movie theatre.

The theft began shortly after Najib won the 2008 election, and by the 2013 election, so many Malaysians were aware that something was seriously wrong that the opposition coalition, led by Anwar Ibrahim (who had been released from jail in 2004), got a majority of the votes. It didn’t win the election, however, because Malaysia’s first-past-the-post election rules gave Najib’s coalition more seats.

By now the US Department of Justice and the FBI were going after $1.7 billion of 1MBD money that had been spent or hidden in the United States – “The Malaysian people were defrauded on an enormous scale,” said Deputy FBI Director Andrew McCabe – but Najib just carried on as before.

When Anwar Ibrahim’s support continued to grow, Najib had him arrested, tried on another sodomy charge, and jailed for five years in 2015. The following year Mahathir Mohamad quit the ruling party because he was “embarrassed” by the corruption, and popular protests began in the streets of Kuala Lumpur. Najib didn’t even blink.

Last year Najib dismissed his own deputy and the attorney-general for making critical comments about the scandal, and in January the new attorney-general he appointed declared him free of any guilt over the affair. That was when Mahathir Mohamad’s patience ran out, and he declared that he would lead the opposition coalition against Najib in the 2018 election.

He promised that he would immediately get a royal pardon for Anwar Ibrahim if he won, and would hand over the government to Anwar within two years. Although nobody quite trusted him, enough voted for him anyway, and the Malay-dominated coalition led by Najib lost power for the first time in the country’s history.

Mahathir has already sprung Anwar from prison, and the American, Swiss and Singapore authorities are all eager to help him track down where the stolen money went. He even thinks he can recover most of it. And Najib Razak has been ordered not to leave the country pending further investigations into his fortune.

A happy ending to the tale, but there is one more service Mahathir could do for his country, and he is the only person who can do it. Only he has the prestige, and now also the power, to end the special legal position enjoyed by his fellow Malays.

Malays are, on average, more rural, less well educated and poorer than the other half of the country’s population (Chinese, Indian and indigenous people). In an attempt to improve their lot and win their votes, successive Malay-led governments have granted them large educational and commercial privileges.

Perhaps special access for Malays to Malaysia’s crowded universities should remain, although it is irksome to better-qualified students of other groups who are frozen out. But the rule that allows only Malay-led companies to bid on most government contracts is holding the entire economy back and has been the main source of corruption for the past six decades. Mahathir could and should kill it.

The four-party coalition he leads includes many Malays but is not dominated by them. At 92, he has no future political ambitions and can afford to annoy the entrenched clan of Malay ‘businessmen’ who live off padded government contracts.

If he acts now, he would give the country a second chance to become what it could be: a prosperous, spectacularly multi-cultural Asian version of Switzerland (without the mountains, of course).