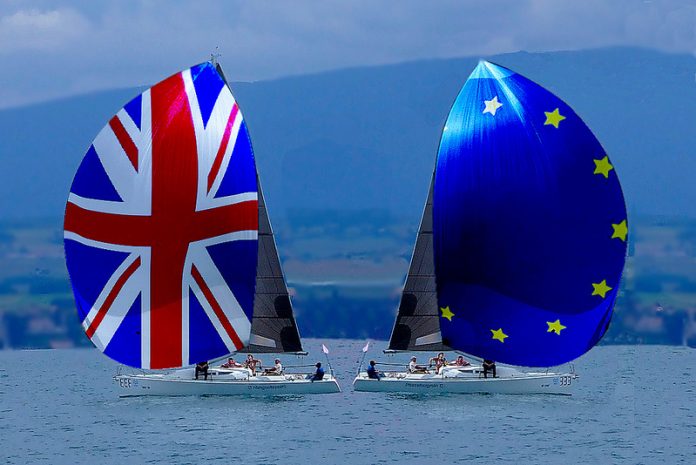 Even with Donald Trump scheduled for a brief visit to the United Kingdom this week amid massive protests, it’s still ‘all Brexit, all of the time’ in the sceptred isle – and the long struggle over the nature of the deal that will define Britain’s relationship with the European Union post-exit allegedly reached a turning point last weekend.

They had nothing else to offer. They had no Plan B. She faced them down,” said a senior government official about the hard-line Brexiteers after Prime Minister Theresa May got them to sign up to a so-called ‘soft Brexit’ at a crisis cabinet meeting last Friday. But the armistice between the ‘Leave’ and ‘Remain’ factions in her fractious Conservative Party lasted less than 48 hours.

The sheer fecklessness of the ‘Brexit dream’ is epitomised by Johnson, who first compared May’s negotiating plans to polishing a turd”, then came round to supporting them for about 36 hours, and finally resigned, saying that they would reduce the UK to a vassal state” with the status of a colony” of the EU. Yet at no point in the discussion did either of them offer a coherent counter-proposal.

And what is all this Sturm und Drang about? A negotiating position, devised by May with great difficulty two years after the referendum that yielded 52% support for an undefined ‘Brexit’, which could never be accepted by the European Union. Its sole virtue was that it seemed possible to unite the ‘Leave’ and ‘Remain’ factions of the Conservative Party behind it. But the unity imposed by May broke down before the weekend was over.

All four of the great offices of state – prime minister, chancellor (finance minister), foreign secretary and home secretary (interior minister) – are now held by Conservative politicians who voted Remain in the referendum. Yet they are unable to persuade their party to accept even a ‘soft Brexit’ that preserves Britain’s existing access to its biggest trading partner, the EU.

The Brexiteers’ power lies in their implicit threat to stage a revolt that overthrows May, fatally splits the Conservative Party, and precipitates an early election that brings the Labour Party to power. They may not really have the numbers to do that – it’s widely assumed that a majority of the Conservative members of parliament secretly want a very soft Brexit or no Brexit at all – but May dares not test that assumption.

So, horrified by the prospect of a Labour government led by Jeremy Corbyn (who is regularly portrayed by the right-wing media as a Lenin in waiting), the Conservatives are doomed to cling desperately to power even though they can probably never deliver a successful Brexit. And the time is running out.

The United Kingdom will be leaving the European Union on 29 March of next year whether there is a deal that maintains most of its current trade with the EU or not. In practice, the deadline for an agreement is next October, since time must be allowed for 27 other EU members to ratify the deal. If there is no deal, the UK simply ‘crashes out’, and chaos ensues.

The volume of trade in goods and services between the United Kingdom and the rest of the EU is so great, and the preparation for documenting the safety and origins of goods and collecting customs on them so scanty, that the new border would simply freeze up.

That would cause great difficulty for many European enterprises, but for Britain, it would be a catastrophe. As an example, two-fifths of the components for cars built in the UK are sourced from elsewhere in the EU. Yet most of the time available for negotiating a soft Brexit has already been wasted, and Britain still does not have a realistic negotiating position.

This preposterous situation is almost entirely due to the civil war within the Conservative Party between the Brexit faction and the rest. The only reason that there was a referendum at all was because former prime minister David Cameron thought that a decisive defeat in a referendum would shut the Brexiteers up and end that war. He miscalculated.

The Brexiteers spun a fantasy of an oppressive EU that was the cause of all Britain’s troubles and sold it to the nostalgic older generation, the unemployed and underemployed who were looking for somebody to blame, and sundry nationalists of all colours.

They narrowly won the referendum with the help of a rabidly nationalist right-wing press, spending well beyond the legal limits in the campaign – and, it now appears, with considerable support from Russia. (The biggest contributor to the Brexit campaign, mega-rich investor Arron Banks, met the Russian ambassador at least eleven times during the run-up to the referendum and the subsequent two months.)

There’s still a chance that reason will prevail before the UK crashes out of the EU, of course. But the odds are no better than even.