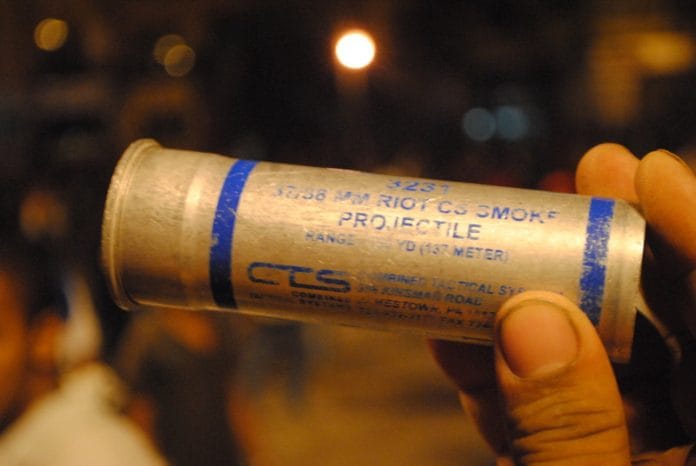 Tear gas is among the least of the problems facing those who care about the murder and destruction of war. But it is a major element in the militarization of local policing. In fact, it is widely deemed illegal in war, but legal in non-war (although what written law actually creates that loophole is unclear).

Like blowing people up with missiles from drones, shooting people for being Palestinian, holding people in cages for decades without charge or trial on a stolen corner of Cuba, or zapping people with tasers for being African American, the legality of firing tear gas or mace or pepper spray at people — regardless of whether it harms or kills them, as it often does — is believed by many to hang on whether or not the action was part of a war.

The distinction is a bizarre one in a number of ways. First, no current wars are themselves legal. So drone murders don’t get to be legal if they’re declared to be part of a war.

Second, state militaries openly wage war against governments, non-governmental groups, amorphous categories of people, and even against tactics or emotions (terrorism, terror). When a government wages war against distant people, such as the U.S. government in Afghanistan, Iraq, Pakistan, Syria, Yemen, etc., it is theoretically forbidden to use tear gas (even while using napalm, white phosphorous, and far more deadly weapons that are not chemicals). But when the same government wages war against people it claims belong to it (sending National Guard troops to both foreign wars and New Orleans, Ferguson, Baltimore, etc., and not just Guard but also police troops armed and trained by both the U.S. and Israeli militaries) it is supposedly allowed to use weapons that are too evil to use abroad.

Third, the U.S. government is nonetheless permitted to — or at least it routinely does — market and sell and produce and deliver those weapons for use by the world’s most brutal governments against the people whom they claim belong to them.

Fourth, when the U.S. military occupies other people’s land for decades as in Afghanistan, the world shows little concern (and an International Criminal Court “investigation” goes nowhere) when the global police kill with acceptable weapons, but tear gas remains an unacceptable weapon, not for use in war. However, the occupation gradually loses the name of war, and the troops now seem to have so much tear gas at their disposal that they use it on themselves.

I’ve long opposed using the term “war” for things other than war. I don’t want a war on cancer for a great many reasons, including the need for a focus on prevention, the need to lose warlike habits of thought, and the need to maintain the word war for reference to, you know, war — for moral, practical, and legal reasons. The bans on a war in international law, already generally ignored, would only be further weakened by expanding what counts as a war. So, I don’t want to equate Ferguson with Iraq. And I don’t want to render more difficult the necessary abolition of war by preventing people from recognizing what war is. Yet I am up against wars that never end, and domestic policing that shares weaponry, training, and mission with wars.

So, here’s what I propose.

By dropping the “wartime” vs. “peacetime” distinction, in this way, we could lose the notion that by somehow being part one and part the other a death camp like Guantanamo escapes the legal restrictions of both. By making everywhere “peacetime” rather than “wartime,” and treating war as merely the greatest of all crimes, we would not be granting governments special wartime powers, but rather stripping them of those for good.

We were sold a drone war on Yemen as preferable to a non-drone war, which of course it predictably led to. Tear gas is often sold to us as preferable to shooting demonstrators with bullets. The better choice for Yemen would have been no war at all. The better choice for protesters is firing nothing at them, but rather sitting down and reading the First Amendment to the U.S. Constitution, and then sitting down with them to hear their grievances. Tear gas police riots, or “riot control” which is often to riots as “counter-terrorism” is to terrorism, generally involve lots of other weaponry as well.

War Resisters League provides information on tear gas on a website. And I recommend the new book I’ve just read: Tear Gas: From the Battlefields of World War I to the Streets of Today by Anna Feigenbaum. As Feigenbaum notes, the use of tear gas has increased dramatically, jumping up in 2011 when it was used heavily in Bahrain, Egypt, the United States, and elsewhere. People have been killed, lost limbs, lost eyes, suffered brain damage, taken third-degree burns, developed respiratory problems, and had miscarriages. Tear gas canisters have fractured skulls. Tear gas has started fires. Crops and non-human animals and birds have been poisoned. Then-Fox News anchor Megyn Kelly dismisses pepper spray as “a food product, essentially,” and a British report from 1970 still widely used to justify the use of tear gas recommends that it be considered not a weapon at all, but a drug. Feigenbaum’s book is a history of weapons development and use, and of corrupt “scientific” marketing.

Super-patriotic Americans will be delighted to know that the United States and England have led the way. Since World War I, Brits and Americans have marketed chemical weapons as a means to reduce suffering in wars and to end wars more swiftly — not to mention a “harmless” means of controlling crowds (by inflicting unbearable harmless suffering). They’ve developed distinctions without a difference. They’ve fudged test results. They’ve hidden test results. And they’ve engaged in human experimentation, with major testing of chemical weapons on unsuspecting victims being done at Edgewood Arsenal in the United States and Porton Down in England for decades beginning just after Germans were convicted and hanged for similar acts.

General Amos Fries, head of the U.S. Chemical Warfare Service, was motivated to market chemical weapons to police as a means of preserving the existence of his agency after World War I. Not only was the war over, but chemical weapons had a very bad reputation — based on, you know, reality. The reputation was so bad, that it took the UK another generation (and the aid of racism in applying them first to colonies) to fully come around to accepting the use of chemical weapons by police. Fries marketed chemical weapons as excellent for both “mobs” and “savages.”

“I am strongly in favour of using poisoned gas against uncivilised tribes,” quoth Winston Churchill, as eloquent and ahead-of-his-time as always (and yet, as always, I fail to feel the love everybody else seems to always respond with).

A major militarization of police, in Feigenbaum’s account, came about with the adoption of tear gas by U.S. police departments in the 1920s and 1930s. While we might imagine that guidelines were in place from the start rendering the way that tear gas has so often been used (as an aggressive weapon against trapped crowds and in enclosed spaces, etc.) unethical, Feigenbaum corrects this misunderstanding. Tear gas was designed and promoted as a tool for use against unarmed civilians at close range and in enclosed spaces. Its increased effectiveness in such cases were selling points. This may be worth bearing in mind as the U.S. Army is now training soldiers to kill underground.

The first big test in the glorious history of the use of tear gas as “crowd control” came when the U.S. military attacked World War I veterans and their families in the Bonus Army in Washington, D.C., killing adults and infants, and giving tear gas a new name: the Hoover ration. Far from a point of shame, this murderous attack on veterans “using chemical weapons on their own people” (to echo the oft-used justification for later U.S. “humanitarian” wars) also became a marketing point. The Lake Erie Chemical company used photos of the attack on the Bonus Army in its sales catalogues.

The United States pushed tear gas on the world and sold it to British colonies until the British felt compelled to become their own producers. Turning points in its acceptance for Britain came in India and Palestine. The Amritsar massacre in India created the desire for a gun-like weapon less deadly and more acceptable than the gun, a way, as Feigenbaum writes, to “change how governments looked without any need to change the way things actually were.” The dying British Empire picked up the baton and spread tear gas far and wide. Tear gas was part of Israel from before Israel’s official creation.

We still today think of tear gas in terms of how it has been marketed, despite what our own lying eyes have shown us. During the Civil Rights and Peace movements of the 1960s, as so many times since tear gas has not principally been used to disperse dangerous crowds. It has been used to facilitate attacks with other weapons on intentionally trapped and nonviolent crowds. It has been fired into people’s houses and churches and meeting halls to chase them out into danger, just as it was used to force people out of caves in Vietnam. It has been used as a visual cover for assaults with other weapons. It has been used to create an accepted image of a dangerous crowd, regardless of what the people choking on it are doing or were doing before the tear gassing. Tear gas motivates the wearing of masks, which alters the image and the behavior of protesters. It’s been used by SWAT teams in countless cases where knocking on a door would have worked better. It’s been used as a punishment of protesters and prisoners. It’s been used as a sport by over-eager police/soldiers.

Activists have resisted, have stopped a shipment from Korea to Bahrain, have stopped a hotel in Oakland, California, from hosting a weapons bazaar. But tear gas use is on the rise around the world. Feigenbaum proposes honest scientific studies. I’m not against that. She proposes clarification of the legal status of tear gas. I’m not against that — see above. She proposes, rather desperately, that if this weapon is to be deemed a drug, then the same restrictions on conflicts of interest should apply as apply to drugs. I’m not against that. But Feigenbaum’s book actually makes a simpler and stronger case: ban tear gas entirely.